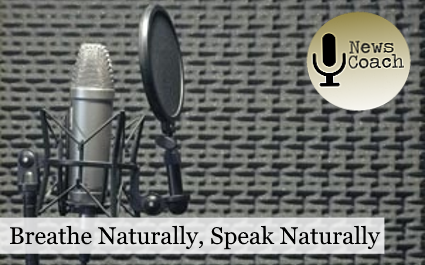 How many times have we heard a reporter on the air saying something like this: "Jim, just 19 minutes ago behind the Carver Elementary School (gasp)... police say (gasp)..."  or how about:  "After the break we'll introduce you to an incredible shelter dog (gasp)... The day before he was scheduled for euthanasia (gasp)... he saved the life of his night shift caretaker."

Uh-oh. Are they having an allergy reaction? A heart attack? Nope. They're trying to force a silly, wrong, unnatural way of breathing. I’m serious!

It's silly because too many of you think that a requirement of your reporting or anchoring jobs is to figure out how and where to suck in oxygen so you don't collapse. Please consider that the vast majority of us do not die once we've fallen asleep. And most of us spend entire days talking without taking moments to suck in air.

That's the good news for all of the video and radio journalists who wonder, “Where do I breathe?” Your trusty brain stem automatically does the work for you! Its job is to keep your diaphragm automatically pumping up and down. That's when it feels like your stomach is going in and out. This action increases our torso size, which automatically induces air to cascade into our lungs. Then your diagram pulls “in,” causing your lungs to compress and expel the air. It is this exhaled air that carries our spoken words to into the microphones and to the listeners' ears. It's really that simple!  And it all happens whether you're breathing through your mouth or your nose, and whether you are speaking or not!

Skeptical? How about trying some layperson’s belly dancing to bring you around? Given that we can more readily observe our stomachs than our diaphragms, and because our stomachs also control torso dimension, we’ll now refer to this body part instead.

Hey!  You’re belly dancing! Kind of. But you are definitely breathing efficiently.

How does this  equate to our jobs of speaking the news?

And using the same execution as above, how about a few new sentences? Ones like these:

"The chaise and chandelier in the chateau were in shambles." or

"Thruway officials say the passengers were tourists from Italy, on their way from New York City to Niagara Falls."

Having a bit of trouble with that last sentence? Try it again, but let your stomach ‘boing out’ after the word "Italy." In one second, your lungs have now fully refilled with air and you are good to go for the whole sentence.

Yes, we automatically breathe in and out from our stomachs. And knowing so should be sufficient to execute our spoken work! We should not turn ourselves into human straws, trying to suck in or gasp in air in by tightening our throats. Does this air even make it down to fill our lungs? No. Can a tight throat efficiently project the air that carries our words to our listeners? No.

I'll have more on breathing, resonance and effecting a strong-sounding, pleasant voice next time