Crossing over: Stringing the elements together 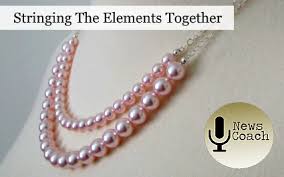 This is the third in a series, aimed primarily at print and radio reporters who are asked to produce video reports. For multimedia journalists, these skills are a must. And for video reporters, it's a reminder of key elements that can make your stories stand out.  Read part one A video primer for print journalists  here.  Read part two Crossing over: Audio advice for print reporters here.

Each part of a video story is like a bead on a necklace. It's one part of the string that makes the whole thing work. The purpose of this series is to provide some clear, simple information to help you create a semblance of a reporting plan, and feel good about your results. Please understand that it’s an extremely pared down, ‘Here’s what generally works best’ primer, with the goal of switching  ‘daunting’ into ‘stimulating.’

B-roll is supplemental video. It gives us more information about your story, conveying what the audio by itself might not. Whether you’re shooting your own video or you’re with a photographer, keep your eyes (and ears) primed for video that is potentially helpful. Your B-roll can be used for your current reporting, and it may prove handy for subsequent follow-up stories.

If you’re using a smartphone to shoot video, keep your camera steady (holding your elbows against your body helps). A good rule of thumb is to stay on the action for at least 5 seconds, which will help you in editing. Kill the urge to zoom. And ‘panning’ (moving sideways) should only be used for showing a wide swath or enormity of something. In that case, move in a slow, controlled manner.

Most often you’ll be writing a script and ‘tracking’ your voice over your B-roll. Sometimes you can lay the audio from a SOT (sound on tape) over it instead. Occasionally, folks chose to provide captions instead of tracking for their stories. And for light features, some forms of music may be laid over your B-roll in the final edit.

When shooting your standups, beware of gratuitous movement, which is generally the infamous ‘walk to nowhere.’ Ideally, is there something you can better explain to us or point out to us while on-camera, as opposed to just a voice track? Does something make noise? Is there something intellectually intriguing or powerful that you’d like to share with us face to face? This last element works when you’re at a loss for show and tell, or when your news is grim. Also, don’t waste time by telling us, ‘I’m here at…’  Just talk to us. Even ‘Here at the…’ is better. If you do walk: you should have a reason for the camera to pan along with you, such as, 'This aftermath of the hurricane…' or, 'All five of these homes...' or, 'Every product on these shelves...’

The site of your standup and your choice of words can also be used to gracefully bring us from one location of your story to another. This is fittingly called a a standup bridge.   If you’re anywhere that presents breaking news, you can use your smartphone by simply shooting and narrating into the microphone. It’s easy. Keep it simple, with a lede line followed by what you know, what you see, hear or smell.

Stringing the elements together, aka 'The Necklace'

Now it’s time to weave your component parts into a story. You’re essentially stringing together a necklace of beads. The beads include natural sound, soundbites on tape, B-roll, your voice track and a standup.

The string that connects them together is your writing. It provides the cogent information needed, and sets up the SOTs or perhaps some natural sound video.   When writing into a SOT, include a new protagonist’s name and ‘title’ (anything from 'neighbor' to something more formal) into your script the first time this person appears.  For video, you’ll also provide this information as a graphic on the bottom (a ‘lower third’).

BONUS: A huge writing tip that is often overlooked

Try your very best not to just write into the SOT, but write out of it as well. A SOT should not denote the end of a chapter. You’ve set it up, now listen to it, and use its content or tone as a segue for writing into your next element of information. For example:

Mall officer (SOT): “I advise every parent to hold tightly onto their child’s hand while shopping.”  Voice track: And that’s what Jane Doe was doing this afternoon when… ‘
Ms. Doe (SOT)

You can pretend you’re Scorsese. You can become as creative as a chef. You can do it!